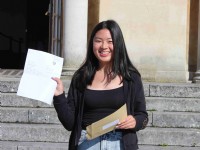 Completing a Sixth Form course during a pandemic is a challenge, but the hard work of students at the Royal Alexandra and Albert School was rewarded today.  There were many excited and relieved students who came to collect their results from the School’s stately home, Gatton Hall.

Angus MacFarlane said “There was less contact time during the pandemic, and it is really hard to focus when you are studying at home.  It was tough, but the hard work paid off.”  Angus achieved three A* grades for his A Levels in Biology, Chemistry and Physics and will be going to Exeter University to read Biology.

Samuel Smith was delighted with his three A grades in Maths, Physics and Economics.  “I was up all night, but I’m very relieved now.”  Samuel will be going to Warwick University to read Accounting and Finance and aims to work in the banking industry.

Li-Norah Flynn will be taking up a university scholarship in the USA after achieving 4 A* grades in Physics, Chemistry, Maths and Further Maths.  She plans to major in Maths at Williams College in Massachusetts, which is one of the leading liberal arts colleges in the USA.  She aims to minor in Environmental Science.  Li-Norah, who was a boarder at the School said “I am ecstatic with my results.  I have enjoyed boarding in the Sixth Form and it has set me up well for moving to study in the USA.”

Natasha Murray has been a pupil at the School for 12 years, having joined in Year 3 and staying right through to the Sixth Form.  “I am really attached to the School and I don’t want to leave.  I stayed in the Sixth Form because it is more personal, with more one-on-one time than other places.  There is a real sense of community and it really helped during lockdown”.  Natasha achieved an A* in Art and A grades in English and Sociology, and will be taking a gap year before going to university.

Head Boy, Niam Patel said “Now I can party!” after opening his results.  He secured two A*s and a B and is thrilled to have a confirmed place at Nottingham University.  Niam was with his mother, Mrs Kaushika Patel, and she said “Niam has had a very different Sixth Form experience from my older child.  There has been a lot of online learning which will never replace face-to-face learning.  The School has provided great support for students and the repeated assessments have helped him to achieve the grades he needed for Nottingham.”

As well as individual successes, many subjects had 100% results with grades A*-C.  These were Business Studies, Computing, Drama, French, Geography, Further Maths, Music and Spanish.   43.2% of results achieved a grade of A or A*.

Acting Head, Rea Mitchell said “The students have made fantastic progress in difficult circumstances, and their results show just how much they have achieved.  23% of students have secured places at Russell Group universities including five at Exeter and two at Durham.  Throughout the pandemic, staff have worked hard to offer remote learning and provide the support students need to achieve their goals.  This, combined with the determination of the students themselves, has given these amazing results.”

Back to press releases