The Founder's Day prize-giving ceremony was particularly special in 2009. In addition to celebrating the achievement of pupils who received the School's prizes, three pupils were presented with the nationally recognised 'Diana Award'. Year 11 pupils, Calum Spink, James Ascough and Nadia Howell each received a Diana Award for their outstanding and selfless contribution to their community and for being positive role models. 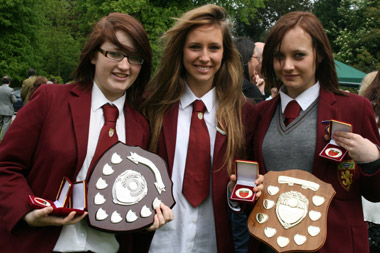 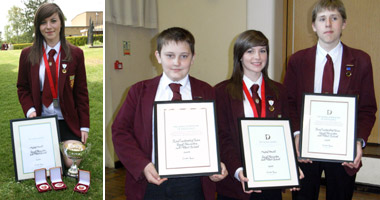 A Summary of the Headmaster's Speech

I would like to welcome parents, supporters of the School, fellow teachers and non-teaching members of staff, Governors, members of the Board of Management and of the Council (of whom more later) and pupils - the school only exists for you! I would also like to welcome Roger Newstead, Mayor of Reigate and Banstead, Angela Fraser, who is just completing two year stint as Chairman of Surrey County Council and our visiting speaker Peter Martin, Executive member for Schools Children and Youth Services.

The reading we heard a few minutes ago "Let not many of you become teachers, my brothers, for as such we will incur a stricter judgment" was not actually a biblical warning about the coming of Ofsted..... but a comment on the pressure on teachers from me, from Governors and from you parents to get the best out of each and every young person - your children.

Perhaps the most important thing I do as Headmaster, is recruit teachers. I like to ask applicants why they want to teach. Generally they have difficulty in putting into words precisely why they have been drawn into teaching, but it has been irresistible; they cannot explain quite why, but teaching is what they have to do.

I am constantly staggered by the time and effort that my colleagues give to prepare their lessons, to mark work and then to run an extra revision class, to spend time helping a pupil struggling with coursework, to work in boarding houses and to run activities. Let me just read you the list of activities that were run on Monday afternoons last term:
Chess, Computers, Cookery Club, Writing Club, Tech Club, Table Tennis, Art Club, Netball, Dance Academy, Football Training, Rugby Practice, Padbox Training, Riding, Geography Help Club, Business Help Club, Gatton Performers and Bothy Music Practice Time.

So I ask you to join me in thanking the dedicated, hardworking, enthusiastic and fun-loving (that is very important) staff of this School for all that they do - a lot of which is unseen and for which they are rarely thanked.

It was Mr Chris Turner who read the lesson, and this is his final term as Head of Maths after 22 years of service to the School. Most people's careers tend to tail of a little towards the end but Chris Turner does not conform to the general rule. The football team he currently plays for recently thrashed a staff team 15-1 and over the last few years GCSE Maths results have risen steadily, reaching 67% last year. The current Year 10 pupils recently took their first modular exam for Maths GCSE and not only did 76% achieve a pass grade but 30% achieved a grade A or A*. And what was a delighted Mr Turners' comment ? He said: "I think there are quite a few more who can pass and more who can get an A*". Chris thank you for what you have done for many generations of pupils at this School.

I said I would tell you more about Governors, the Board of Management and Council. This School is extraordinarily lucky in the calibre of unpaid volunteers - for that it what they are - who put in time to support and help the School and advise me. Men and women with successful careers in many different spheres: leaders of companies, accountants, lawyers, faith representatives, the heads of a number of major children's charities and half a dozen retired Heads not to mention The Mayor of Reigate and Banstead and the Chairman of Surrey County Council.

At their different meetings they rarely actually vote. They tend to discuss and come to an agreement.

I want to tell you about the last meeting of the Board of Governors. At that meeting Governors did actually take a vote, and I told you that this is pretty unusual. After some discussion they voted, unanimously, to start the formal process of applying to have our own Sixth Form here at this School.

Over the next few weeks we shall be consulting parents, pupils, staff and anyone connected with education or schools in this area. The final decision is likely to be taken by Surrey County Council in September. Oh and we have the Surrey County Council Executive member for Schools Children and Youth Services as our speaker today. No pressure Peter!

Peter might not actually believe it - and you might not believe it either - but I actually invited him to speak for another reason.

Surrey County Council financed the building of the original School Buildings and for the last sixty years has funded the education here.

I want to talk about the mutually supportive way in which we, as a School, work with Surrey and with other Surrey schools.

These are just some of the ways we work together:
- Last year the Beacon School in Banstead failed an Ofsted inspection and was put into Special Measures. We lent them a senior member of staff for two days a week to help support school improvement. That School is now out of Special Measures. This year one of my senior team is working as Associate Head at Epsom and Ewell High School, helping that school to get out of Special Measures.
- Surrey wished to pilot the idea of a short period of intensive one-to-one tuition to try to support pupils who are having difficulties with either Maths or English to see if there is a quick way of getting pupils back on track. We immediately agreed to help and pilot the scheme. I am pleased to say that early results suggest that this initiative is having positive effects.
- Our Head of Science has worked for Surrey as a Lead Practitioner, delivering training to Science Departments in other Surrey schools. I give my time to chair the South East Surrey 14-19 partnership, which is one of the more successful 14-19 Partnerships in Surrey, and the Head of ICT and one of my Senior Team have delivered courses for Surrey on Internet safety for pupils.
- Just over a year ago we had a number of new pupils join the School who needed some support with their English. Surrey launched an innovative project to bring support into this School with adult mentors from the local community and this imaginative approach is proving a real success.
- I am very pleased that, over the last two years, Surrey has financed a small but increasing number of boarding places at this school for children whose home circumstances were having an adverse effect on their progress in School.

Peter - and indeed Angela as Chairman of Surrey County Council - today we celebrate sixty years of working together for the benefit of children. Thank you for working successfully with us.

Talking of children, it gives me great pleasure to be able to report on the happenings of the Famous Four, Aubrey, Wilson, Norman and Mary. These are four orphans from Malawi that this school supports.

The most notable change is that Mary has moved to another Foster House as it is more appropriate at her age for her to live with other girls. Mary obviously enjoys the company of her 5 foster sisters, and they celebrated her birthday together last month.

Aubrey continues to make progress and benefits from weekly physiotherapy for his Cerebral Palsey. He has to take the bus to school to be sure he gets there on time, but is now able to walk home with the others which of course builds his strength.

Wilson is now the proud owner of a pair of hearing aids which he wears to school. His hearing deficit was noticed because he spoke very quietly, now his confidence is noticeably improved.

Norman continues to be a bright and energetic lad who excels at Mathematics and loves to play football.

You may remember that this school has pledged to support all four of them throughout their whole education. This means that we need to fundraise not just once but every year in order to give these children the best possible start in life which has not been kind to them from the start. When we leave Chapel in order to walk down to Gatton Hall, look at the Art Exhibition and have lunch, there will be prefects at the Chapel doors with buckets or collecting boxes. I ask you to give generously to support these four children before enjoying a drink and a good lunch.

The new John White Teaching Block will open after half term. It has two new Science laboratories, a huge Dance Studio - the size of two classrooms - and two general purpose classrooms. At this point I would like to recognise the generosity of the late John White who left us almost half a million pounds even though he had never even visited the School - he had just read of the work that this school does in providing boarding education to a number of vulnerable young people. We also benefitted from a legacy of over one hundred thousand pounds from Mr Maurice Chance who had been a long-standing supporter of the charitable work of this School. The balance of the cost has been met by our own Charitable Foundation and I am most grateful for that massive support.

The playing fields out there look a mess at the moment. But in September we will have a floodlit all-weather hockey pitch, three floodlit netball courts and a sprints and jumps Athletics area. This has been made possible by grants totalling seven hundred thousand pounds from the Youth Sports Trust, The Netherby Trust, The Peter Harrison Foundation and The Bernard Sunley Trust. I think we should show our thanks for their generosity.

So, our facilities will be much enhanced in September, but there will be other developments. Following the Outstanding Ofsted report in June 2008 and our record GCSE results last Summer, the Department for Children, Schools and Families awarded us the title of a High Performing Specialist School. We are thus taking on a second Specialism in Maths and Computing and we have also been invited to be the Lead School in the area for provision for Gifted and Talented pupils.

Enough from me. We are now going to hear Laura play the alto sax, after which I am very much looking forward to hear what our visitor, Cllr Peter Martin, has to say to us.

Thank you all for your support for this School and I am sure that even greater successes lie ahead - and they will include record GCSE results this Summer. Thank you.